As many of you are aware,  the boys and I took some time off on writing this blog.   During that time off----Lee and I were lucky to get a new puppy.  Sir Richard.  I had hoped to start writing sooner but events took place and this blog was put to the bottom of the list. 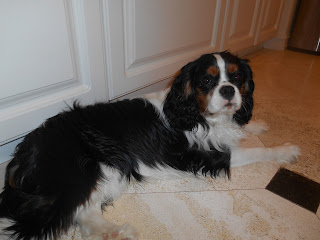 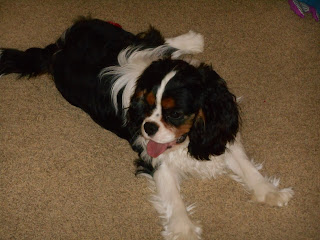 Sir Richard will turn one year old on May  4th.  The other boys have taken him in and Lance is teaching him all of the "things" he needs to know - such as where the treats are kept and how to get one.  Richard is a "tri-color" (black, white and brown).  He is the same breed as the other SIRS.  We were very lucky to get this Cavalier from Orchard Hill Cavaliers in Leesport, PA.   A special "thank you" goes to Erica Venier for giving us the chance to raise him.  It was made possible by our dear friend and the SIRS breeder Darlene Tsubota from Hawaii.

Sir Richard's legal name is "Orchard Hill Arts and Letters".  His parents are  SIRE- CH Verheyen Dustin and DAM- CH Orchard Hill Ask the Moon.   The Sire is Tri Color and his mother is Bheim.

Recently, Darlene (the breeder of our first three Sirs) was on the news in Honolulu (KITV-ABC 4) with participating in a new program at the Honolulu Airport.  The program is called "Wags of Aloha", it is a volunteer program the Kuhio Lions Club launched at the airport. It's one of 20 in motion at airports across the United States.  Listed below is a link to the news report.

I hope that you enjoyed it.  Maybe "girl" was the dog that Lee and I kept for a few months last year for Darlene.  It takes a few months always to get a dog "legal" to get into Hawaii.  Darlene will be bring OH Maybe Forever back to CA at the end of April for Maybe's two year health check.  We have scheduled visits for eye, heart and hip checks.   NO PROBLEMS but wanting to make sure before moving on.  Lee and I, along with many others are looking forward to having Maybe stay with us during the week.  Lee is planning a party and we may make it a first birthday party for Sir Richard too. 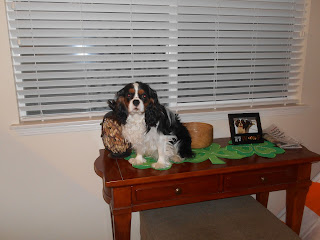 Yes, Sir Richard is on the sofa table.  He has learned how to jump u to it.  I had my camera next to me when this took place yesterday.  It was hard to tell him "NO" because he looked so cute.  Like a stuff dog on the table. 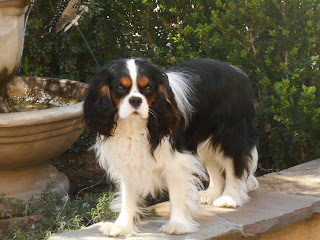 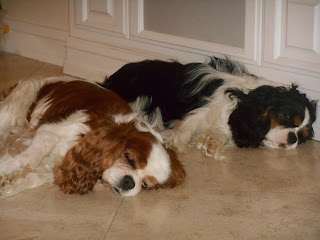 Sir Richard has learned somehow that Sir Henry is the "boss" of the dogs in this house.  Henry turned 12 years old at Christmas.  They have become good friends along with Sir Lancelot. 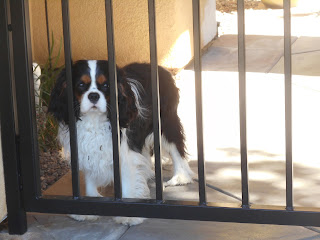 Sir Richard loves to be on "guard" at the front court yard gate.  He really does not bark unless he is playing with the boys.

My sister, Harlene will be arriving this week for almost a month visit.  Everyone is looking forward to her visit and the upcoming outings. Hopefully, I will be writing about it too.

Until next time we meet on our journey:.